Lung cancer is the deadliest form of cancer for both men and women in the United States.  Less than half of people with lung cancer survive after being diagnosed, according to the American Lung Association. However, when cancer is detected early, especially before it has had a chance to spread beyond the lungs, the five-year survival rate rises from just 5 percent to 56 percent.

To assist with earlier and more accurate diagnosis, the Monarch® robotic bronchoscopy machine allows physicians to easily and precisely move through the lung and its 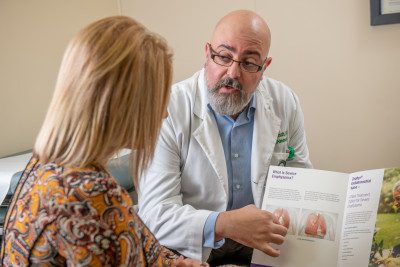 bronchi and view sections of the lung that once were nearly impossible to reach and obtain a tissue sample for biopsy.

Cabell Huntington Hospital is among the first hospitals in the nation and the only one in the Tri-State to use this new, more precise robotic technology for early detection and diagnosis of lung cancer, including hard-to-reach areas.

Physicians pass a robotic bronchoscope through the patient's mouth and secure it in one of the main branches of the lung. Using a hand-held control, a catheter is passed through the scope into the airways. Tiny cameras allow doctors complete visibility while they biopsy nodules in hard-to-reach spaces without a patient needing invasive surgery.

“Because this technology improves reach, vision and control for bronchoscopy procedures, it holds the potential to help diagnosis cancer even earlier than before,” said Yousef Shweihat, MD, interventional pulmonologist at Cabell Huntington Hospital’s Center for Lung Health and St. Mary’s Regional Lung Center. He is also an associate professor in the Department of Internal Medicine at the Joan C. Edwards School of Medicine.  “I am excited about the promise of this technology to offer more hope for future patients diagnosed with lung cancer.”