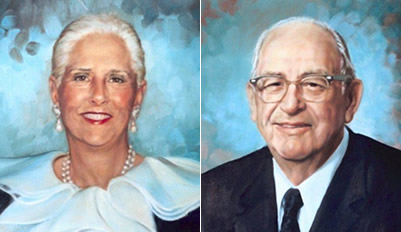 Born in London, Joan Edwards came to the United States at age four to live in New Orleans. By the age of 11, she was singing on WWL Radio, building the foundation of a promising musical career. She would go on to make movie shorts, sing with an orchestra, record with Clyde McCoy and his Kentucky Band, and perform in New York, Pittsburgh and Chicago.

She married James F. Edwards in 1937, moving with him to Huntington, where they lived for more than 10 years. In time, she became a business partner as well as a spouse. When her husband's fascination with horse racing led to their purchase of four racetracks, she worked with contractors and work crews to help revamp them. Alongside her husband, she also raced horses in the United States, Canada, England and Ireland. She attended meetings with her husband and ultimately became CEO of the Edwards family's mattress business, overseeing three factories.

During the 1990s, Mrs. Edwards made multimillion dollar contributions to Marshall University to support medical school scholarships, athletics, the performing arts and a new jazz studies program. Her 1993 contribution of $2 million to the athletics program was, at that time, the largest single gift in MU history.

"I hate to see the young people leaving Huntington," she once told a reporter. "That's the reason I was so interested in giving money to Marshall University."

The Edwards tradition of civic generosity is unprecedented in the Huntington Community. Contributions that she and her family have made in Huntington include: